WhatsApp has announced 3 new privacy features that will soon be available to all users. 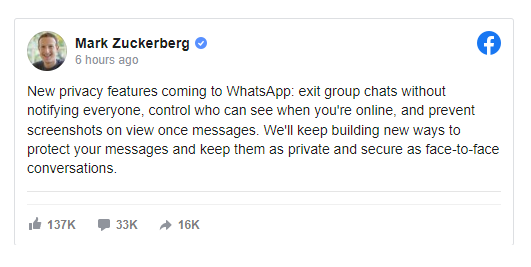 One feature is to leave WhatsApp groups silently.

By doing this, the group admin will get an alert, but the other members will not know about it.

This feature will be more useful in large WhatsApp groups where people get overwhelmed by the volume of messages.

The second feature will also be very useful for users as it can prevent others from knowing that you are online.

In this regard, you will have 4 options available: Every One, My Contacts, No Body and My Contacts Excep.

Now when you are online on WhatsApp, it becomes known to everyone who can view your profile.

Both these features will be available to users sometime this month.

The third feature is regarding View Vince.

This feature sends a message that disappears after being viewed once, but a screenshot of these messages can be taken.

So now the screenshot will be blocked with the new feature.